AS is an inflammatory joint disease that affects young adults, most often before age 40. Men are more often affected than women. It primarily causes inflammation of the spine and pelvis. 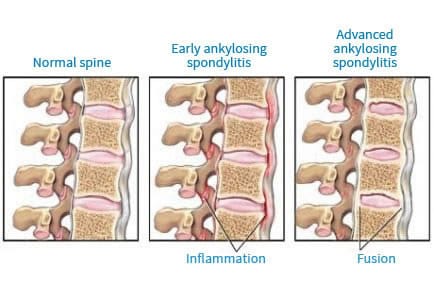 AS is due to an inflammation of the entheses, that is to say, a small region of a tendon where it inserts into the bone. As we have a lot of entheses in the spine, this explains why this is the region of the body the most often affected.

At the present time we do not know the cause of AS. It seems that the HLA B27 antigen (that is sought by performing a simple blood test) is involved: it is much more frequently found in spondylitis than in the general population but its presence alone is not sufficient to cause the disease and it is not found in all patients.

The symptoms are usually pain in relation to inflammation of the sacroiliac joints (joints located in the buttocks between the sacrum and the hip bone), ligaments and/or joints of the vertebrae, joints of the thorax (chest or chest cage). The pain, located in the buttocks, around the middle of the back and the back of the thigh, occurs mostly at night, decreases during the day and with exercise only to reappear in the evening with fatigue. It does not get better with rest.
Morning stiffness is also observed.

Sometimes there are other signs other than joint pain, particularly with regard to the eye: this is anterior uveitis or iritis, an inflammation of the anterior part of the eye which, in most cases, results in a red and painful eye and sometimes blurred vision. But one can also see psoriasis of the skin and inflammation of the digestive tract.

How do you diagnose it?

When AS is suspected the doctor prescribes a blood test for a biological assessment that may (rarely) show signs of joint inflammation: increased erythrocyte sedimentation rate (ESR) and C-reactive protein (CRP), but which are not always present in the early stages of the disease.

The search for HLA B 27 antigen on the surface of white blood cells may be useful to the diagnosis because some forms of AS are associated with its presence which, however, is not sufficient to confirm the diagnosis of the disease.

X-rays are also required, in particular of the spine and pelvis. It is the presence of sacroiliitis, inflammation of the sacroiliac joints, which will help the doctor to make this diagnosis.

Lastly, the doctor may use tests with NSAIDs, which consists in prescribing an NSAID treatment for the patient and then judging its effectiveness: a positive response supports the diagnosis of AS.

How does it evolve?

Its evolution is progressive and varies according to each individual patient. It often manifests itself in flare-ups which, if left untreated, cause pain at night, waking the patient up at around 2 am and morning stiffness lasting more than 30 minutes. Very rarely, ossification stiffness of the spine may appear as well as the hips being affected. Fortunately, these severe forms have become increasingly rarer and one sees mostly mild forms without chronic stiffness.

Different types of treatments are prescribed with the aim of relieving pain, reducing inflammation, preserving joint function and improving quality of life. There is currently no DMARD type treatment.

Symptomatic treatments
Anti-inflammatory drugs (NSAIDs) are very effective in AS. They quickly reduce pain and morning and stiffness and improve joint mobility.
Analgesics relieve pain. Some are available without prescription but if their use becomes too frequent, you must talk to your doctor so that he or she can reassess and adjust the your basic treatment. 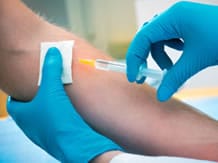 If at least two different NSAIDs fail to work, an anti-TNF biological treatment can be prescribed. The rheumatologist chooses the most suitable therapy depending on the severity of the SA and the patient's medical history and contraindications

They act specifically on certain substances released by the immune system - TNF-alpha.
These drugs administered subcutaneously or intravenously can have side effects. Medical monitoring of these treatments is therefore of the utmost importance.

Functional exercises for incipient osteoarthritis of the hip