The use of analgesics

What are they used for? 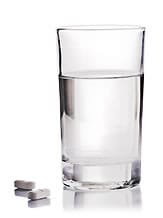 The role of analgesics, also simply called painkillers, is to relieve pain.

Those which act on the actual site of the osteoarthritic pain, i.e. the joint, are called peripheral analgesics. Some non-steroidal anti-inflammatory drugs at low doses can also be used for their action against pain.

There are others that affect the way pain is perceived by the brain. These are called central analgesics. They have a superior action to the aforementioned drugs and should be offered only if the peripheral analgesics have failed to relieve pain.

"Strong" central analgesics are very rarely needed in osteoarthritis. If the doctor needs to prescribe them, he will do so according to strict rules of use.

How are they used?

Taking pain relief should be modelled on the pain: if pain is constant, they will be taken several times at regular intervals during the day.

Meals do not influence the effectiveness of painkillers; they can be taken at the most appropriate time in relation to the pain. It's up to you to determine, based on the intensity of your pain, when the pain relief will be most useful.

What precautions need to be taken?

Peripheral analgesics are generally well tolerated. However, care must be taken not to exceed the maximum dose indicated by your doctor and written on the prescription.

Although rare, unpredictable side effects may be caused by peripheral analgesics (liver problems, allergies, etc.), your doctor knows them and will prescribe the medication best suited to you.

Central analgesics may cause drowsiness, nausea, constipation and dizziness. These analgesics should be monitored by your doctor. So follow your doctor's prescription and do not hesitate to ask to him or her any questions you might have.

Never combine two painkillers yourself without your doctor's advice as it is usually unnecessary and increases the risk of side-effects.

Which joints are affected by it?