The purpose of this operation is to replace your knee or the part of your knee damaged by osteoarthritis by a prosthesis. Depending on the particular case, it is an implant that will replace the joint surfaces (cartilage) of the tibia, femur and patella.

Who is it for? 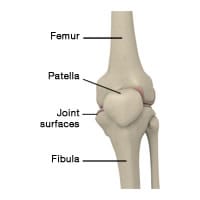 In general, fitting a prosthesis is a permanent surgical solution; it can be considered when the patient's pain is not relieved by any other medical or surgical treatment usually used for osteoarthritis.

This operation is most often performed on patients over the age of 65, whose osteoarthritis affects two or more of the internal, external and anterior compartments of the knee. But some young patients may be exceptions, every case being different, only your doctor can assess the need and benefit of such an intervention.

Fitting a prosthesis is major surgery. It requires preparation with a complete clinical and radiological assessment. It should, if possible, be carried out in an establishment specialised in prosthetic surgery. The length of hospitalisation is usually more than one week. This operation requires general or epidural anaesthesia.

This will depend on your general condition and the type of operation required to fit your prosthesis. The length of the operation can vary from between 50 minutes and 2 hours. In general, it is desirable to perform the operation after a stay of 15 to 30 days in a rehabilitation centre.

The following days and rehabilitation

Walking can be resumed gently towards the fourth day, with the help of crutches which are necessary at first, then subsequently dropped (usually after a month and a half). Rehabilitation is recommended and even indispensable. Helped by the physiotherapist and the surgeon, it will allow the patient to recover their range of motion and facilitate walking again. In most cases, the person can return to work after 2 ½ months to 3 months following the operation.

However, after such an operation, the patient should be regularly monitored by their doctor or rheumatologist. To do so this should include regular visits to the surgeon: 2 to 3 months after surgery, then towards the sixth month and one year later. Thereafter, an annual check-up is desirable.

Pain and mobility
This procedure is often very effective with regard to pain. It eliminates from 80 to 95% of osteoarthritic pain. Improving mobility depends on the type of prosthesis used, but also the patient's condition before surgery. However, generally, a sharp improvement is observed.

The scar
In most cases, the scar is placed in the vertical axis of the leg in front of the patella.

The type of prosthesis

There are several different types of prostheses depending on:

This is the most common type of prosthesis. They can be used for most cases of osteoarthritis, even if the latter affects only a single compartment of the knee. In addition, several models exist and are used according to the state of deformation of the knee and allow the retention or not of the cruciate ligaments.
Choosing one of these prostheses depends on the condition of your knee. Each case is different, your doctor is best placed to guide you in choosing a model. The models of tricompartmental prostheses differ according to 3 factors:

Osteoarthritis of the joint between the kneecap and femur. This type of prosthesis is envisaged in exceptional cases.

Generally, this type of prosthesis allows an improvement in knee mobility and walking. Hence, almost complete disappearance of pain. Unlike the other two types of prostheses, these replace only the worn part of the joint. However, this type of prosthesis is used only when a single compartment of the knee is affected: the internal or external tibiofemoral compartment or, exceptionally, the joint between the patella and femur.

In addition, fitting them cannot be considered for a patient whose knee deformity is not very significant and whose cruciate ligaments are normal. Your doctor is the best placed to advise you and explain if you qualify or not for this type of prosthesis.