This pathology is the most frequent of the chronic inflammatory rheumatisms (0.4% of the population). It belongs to the group of systemic or connective tissue diseases. Women in particular are concerned by it (3 out of 4 patients are women). Generally speaking rheumatoid arthritis can appear at any age but the average age of diagnosis is between 40 and 50 years.

When the patient is aged below 15, it is known as juvenile chronic arthritis. It affects many joints, of which the main ones are the hands, wrists, front of the feet, elbows and ankles in a symmetric way, within the space of a few weeks.

Rheumatoid arthritis belongs to the group of autoimmune diseases, but its causes remain unknown. The patient’s body produces antibodies directed against its own tissues provoking a strong inflammatory reaction.

The main tissue that is targeted is the synovial membrane which secretes the joints’ lubricant liquid: the synovial fluid. Under the impact of the inflammatory reaction, it thickens, leading to an erosion of cartilage. The joint becomes increasingly damaged and is gradually replaced by tissue which joins the two ends of the bone which make up the joint. The latter action is responsible for reduced joint mobility.

The inflammation also damages the binding that forms the joint (it slackens) and leads to longer-term symmetrical deformation of the joint under the effect of repeated movements.

The development of rheumatoid arthritis is manifested most often by flare-ups during which one can observe :

If left untreated, the succession of these flare-ups leads to deformation of the joints and the disease spreads to other locations around the body.

How does it progress?

The natural progression of the disease includes flare-ups varying in duration and intensity, interspersed with remissions (disease disappears but returns at treatment discontinuation) unpredictable, gradually destroying the cartilage and tendons. In rare cases, the disease can stabilised. 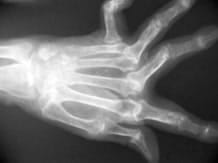 The diagnosis of the disease is not always easy in the beginning because the signs may suggest other diseases and it is often necessary to make additional tests (blood tests, x-rays).

The positivity of the latex test or the Waaler reaction or "rheumatoid factor" and the presence in the blood of anti-CCP are strong arguments in favor of the diagnosis. This is known as "HIV positive for rheumatoid factor," not to be confused with the HIV status of AIDS patients that is unrelated.

Initial x-rays are often normal at diagnosis but can already show abnormalities joints especially hands and feet.
With MRI (Magnetic Resonance Imaging Nuclear) and ultrasound, we can see some early lesions. 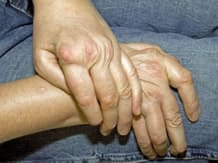 Different types of treatments are prescribed with the aim to relieve pain, reduce inflammation, slow the onset of joint damage, preserve joint function and improve quality of life.

Neither one nor the other act on the progression of the disease.

Among these treatments, biotherapy is the most recent. It acts specifically on certain substances released by the immune system such as TNF-alpha.
These drugs administered subcutaneously or intravenously may have side effects. Medical surveillance for these treatments is therefore of utmost importance. It relies in particular on regular blood tests.

Local treatments
They are also prescribed to prevent the appearance of deformity and relieve pain: injections of corticosteroids, synovectomy, removal of the synovium (synovectomy) and surgery (prosthetic arthroplasty, tendon repair).

The non-drug treatments
Physical therapy may be prescribed in addition to drug treatments to preserve or restore joint mobility and muscle strength.
Occupational therapy, prescribed by the physician, the patient learns to make the best daily actions made difficult by the disease.
Braces, which serve to maintain and to immobilize the joints, can reduce pain and inflammation and, perhaps, to limit the appearance of deformations.

Not to be confused with

What are the benefits of exercise ... 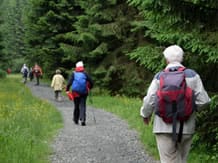