Psoriatic arthritis (PsA) is an inflammatory joint disease characterized by its association with skin psoriasis.
It affects men and women equally and usually begins between the ages of 30 and 50.

Today, we do not know the cause of PsA. Children of parents with PsA may have a higher risk to suffer from PsA one day but it is not a genetically transmitted disease. 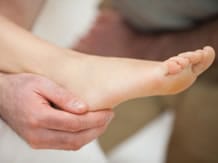 There are many clinical forms, some very similar to rheumatoid arthritis, others very close to the PsA and finally other mixed.

PsA most often affects 1 or 2 large joints of the limbs and joints of the hand. The presentation is more asymmetric (it is not the same joints on the right and left) in rheumatoid arthritis. The symptoms are usually pain and joint swelling, morning stiffness. The spine is often affected, not the neck and back and the joints of the pelvis.

The skin disease psoriasis is characterized by the appearance of scaly patches of whitish appearance on the skin (elbow, knee ...) and the scalp. There is no correlation between the importance of cutaneous signs and that of joint damage. The nails are often damaged and sometimes there is an inflammation of the eye (uveitis).

When PsA is suspected, the doctor prescribes a blood test for a biological assessment that may show signs of joint inflammation: increased erythrocyte sedimentation rate (ESR) and C-reactive protein (CRP), but not always in the early stages of the disease.

The search for HLA B 27 antigen on the surface of white blood cells may be useful to the diagnosis because some forms of PsA are associated with its presence which, however, is not sufficient to confirm the diagnosis of the disease.

X-rays are also required, in particular of the hands, feet, spine and pelvis.

How does it evolve ?

Suffer of PsA may experience sudden flare-ups progressively over the course of the desease.
Generally, it is not incapacitating but it can lead to ankylosis and deformity of the affected joints. 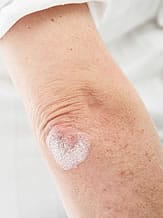 The treatments are the same as those of RA or AS, depending on the clinical form.

The treatment of psoriasis skin

Self-massage of the hip